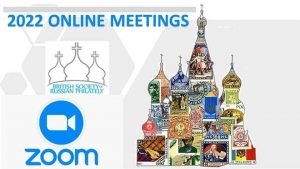 1. Ivo Steijn -Exponentia growth: how Ukraine’s postal stationery got out of hand

Ivo Steijn is a regular contributor to our Zoom meetings and his professional and informative presentations have been very well received. Ivo works as a director for a bank in California and lives in Los Angeles. His collecting interests include Crimean postmarks, Siberian postal history of the Civil War period, and various post-Soviet states like Azerbaijan, Ukraine and Turkmenistan. He has been a BSRP member since the late 19th century (only a slight exaggeration!) and has fond memories of the meetings at the Union Jack Club, back when he still lived in the Netherlands.

2. Robin Joseph – An analytical study of a letter of state sent on 4th May 1545 from Alfonso D’Avalos D’Aquino, Marquis Del Vasto in Pavia to Imperial Tax Collectors in Milan. The display is as far from normal philately as it is possible to get! Exhibited at STOCKHOLMIA 2019

“Hon. Life Member of BSRP. Probably the longest serving member of the Society ! A member for 60 years, I joined the Society officially when I was 18 in 1961 – but first attended meetings when I was 17.

For 25 years I was an Officer of the BSRP, firstly as Auditor, then as Treasurer and Librarian, then Editor of the Journal and also at various times Bulletin Editor, Journal Reprinter in Chief, the Society’s Printer (for the 1916 Post Office List , 1877 and 1878 Postal Statistics etc.etc.) and compiler of the 1st Cumulative Combined Index to English Language Journals on Russian Philately.

I also wrote a number of articles for the Journal and an article for Philatelica Fennica. My primary collecting interests are Russia and Latvia , but I also collect, inter alia, Italian Courier Mail of 15th and 16th Centuries , Sardinian Cavallinis, Banknotes of the Western Army and, of course, Rocket Engines (Rolls Royce RZ2 Engines for the Blue Streak Rocket)”

1. Hans-Günther Grigoleit – The development of the postal system in Georgia after 1991. The influence of stamp dealers
Born June 1942. Studied medicine at Goethe-University, Frankfurt/Main, Germany. Licenced as medical doctor. MD at the German Embassy in Turkey 1970-72. From 1973 employee of a globally operating German pharmaceutical company, with responsibilities for two years in each of the US and China. 1997 retirement and consultant to the pharmaceutical industry. Since 1993 I have had the chance to visit Georgia from time to time and started to collect Georgian postal material. Now I am free to use some of my time for philatelic excursions into Transcaucasia and especially Georgia.

3. Bernard Furnon – A new discovery of Alatyr Zemstvo
Retired officer of the French navy. I live half time in Russia (Moscow) and in France (Avignon). My main collecting interests are Zemstvo philately and Imperial Russia. Expert AIEP for Zehttps://zoom.us/j/92711123327 kimstvo philately. Member of BSRP and various other societies related to Russian philately. Life member of the Union of philatelists of Russia.

I’m a retired Architect living in Sheffield UK. My collecting interests include WW1 Russian and Finnish censorship marks, Allied Intervention into Russia, WW2 Pictorial Soviet Fieldpost stationery, Latvian Ruble period 1918-1922, Poland (mainly 1944-45 plus a few other periods). In addition, I have put together a collection of WW1 Canadian Military 1914-1919 from mobilization, the first contingent, the western front, Canadian military railways in France and finishing with their part in the Allied Intervention into Russia. I own an undeveloped collection of the Spanish Civil War and I am the editor of the Spanish Study Circle magazine “Espana”, in spite of knowing very little about Spanish Philately, but it’s a quick way to learn. I was introduced about ten years ago to the BSRP by Edward Klempka and managed to attend some of the pre-Covid London meetings.

Now retired, Gilbert was Professor, Head of the Chemical Engineering Department at the School of Chemistry of the University of Montpellier and Fellow of the Institution of Chemical Engineers (London). He worked actively for more than 15 years in various research programs for the European Commission and UNESCO. His main interests are in postal history of Imperial Russia (and to a lesser extent, pre-1900’s Swiss philately or German old states).