A postcard sent from Gizhiga to the Kampffmeyer bookstore in Berlin. Postmarked GIZHIGA PRIM. OBL. * * a (10.1.14). This is the only known mail from Gizhiga by Howard Weinert

Overland westbound mail left Gizhiga (pop. 400) only once a year in January, via Okhotsk, Yakutsk, and Irkutsk. From 1900 until 1916 the Gizhiga post office was operated by the local police administration. The message reads,

“Dear Sir! Please send me all your 1914 catalogs of secondhand books. I am culturally lonesome here and would like to buy a lot of books to kill my free time. In Khabarovsk I have already received books from you by cash on delivery. My address: N. Dubrowa, engineer, Naiachan Radiostation (Asiatic Russia – Kamchatka).”

The Nayakhan wireless station, which opened in late 1912, was 100 km west of Gizhiga. The bookstore sent the catalogs on 26 May (13 May old style). Unfortunately, a notice in the 20 May issue of the newspaper Sibir stated,

“In Nayakhan, Kamchatka Territory, the supervisor of the government radiotelegraph station, mechanic Dubrowa, poisoned his two daughters and himself, leaving his wife. The reason is believed to be the difficult living conditions.” 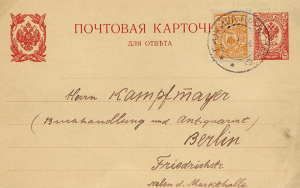 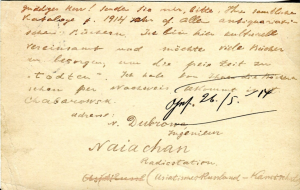 NEXT MONTH: From Vladivostok to Liverpool at the Beginning of the First World War by Philip Robinson