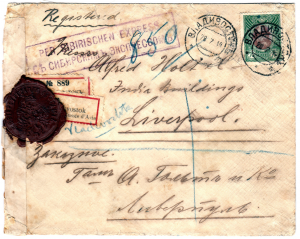 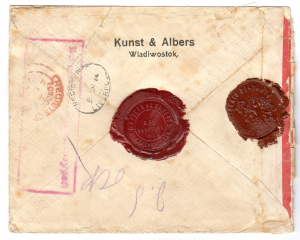 This registered cover was sent by Kunst & Albers, a large German trading company that had many branches in the Russian Far East. Franked with the 70 kopek value from the Romanov Tercentenary issue, it was addressed in English and Russian to the shipping company Alfred Holt & Co. of Liverpool.  Posted at Vladivostok on 28 July 1914 (10 August new style), there are two impressions of a 28mm. double-ring ВЛАДИВОСТОКЪ c.d.s. There is also the bilingual PER SIBIRISCHEN EXPRESS / СЪ СИБИРСКИМЪ ЭКСПРЕССОМЪ cachet used by Kunst & Albers to indicate the Siberian Express, and two overlapping registration labels inscribed in Russian and French. The envelope was sealed with the wax seal of Kunst & Albers’ Vladivostok branch. As the First World War had just broken out, it was opened for censorship at St Petersburg (soon to be Petrograd) and then closed with an adhesive strip sealed with two wax seals of the St Petersburg Head Post Office. There is also a large “Вскрыто Военной Цензурой” (Opened by Military Censor) cachet in red. Handwritten markings in blue crayon include a large cross indicating registration, a reference number 850 and “Vladivostok” alongside the French-language registration label which was partly covered by a censor’s wax seal.

NEXT MONTH:1875 Underpaid Letter from Arzamas Zemstvo to Switzerland by Terry Page