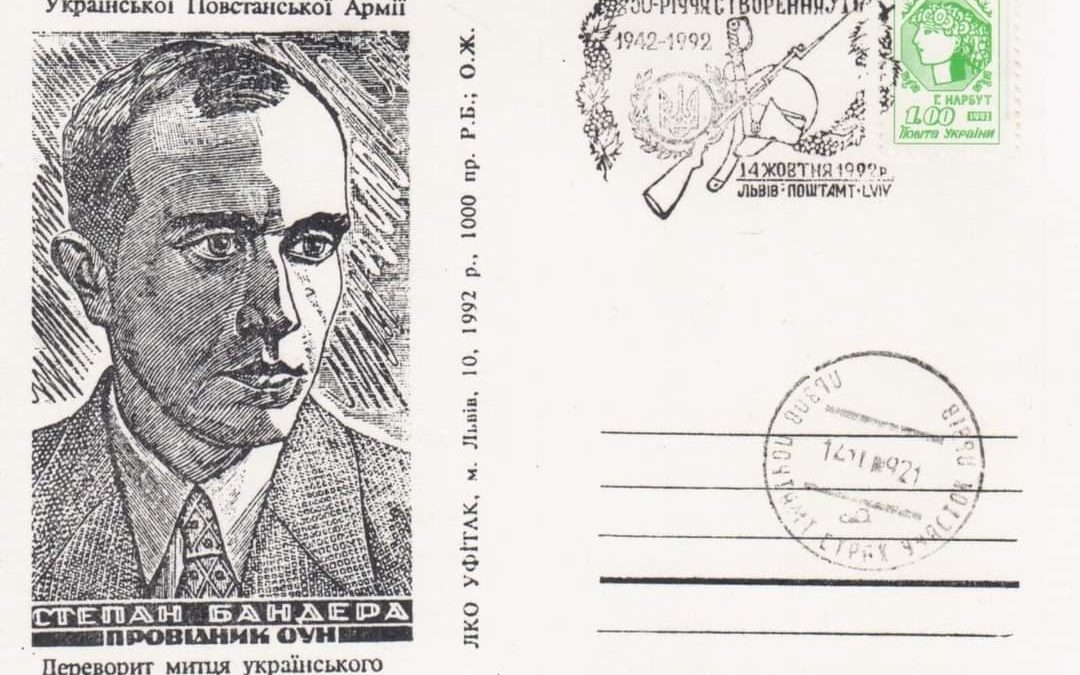 My friend purchased this item on delcampe.

Can anyone translate the card. I know it commemorates the Ukrainian nationalist Stepan Bandera, and I know this can be quite sensitive at the moment, but it would be interesting to know what the rest of the card represents.

BSRP ZOOM MEETING, Sunday 13 March 2022 at 7.30pm GMT
Program
1. Neil Ritchie (President, BSRP) – Welcome
2. Hans-Günther Grigoleit – The development of the postal system in Georgia after 1991. The influence of stamp dealers
Born June 1942. Studied medicine at Goethe-University, Frankfurt/Main, Germany. Licenced as medical doctor. MD at the German Embassy in Turkey 1970-72. From 1973 employee of a globally operating German pharmaceutical company, with responsibilities for two years in each of the US and China. 1997 retirement and consultant to the pharmaceutical industry. Since 1993 I have had the chance to visit Georgia from time to time and started to collect Georgian postal material. Now I am free to use some of my time for philatelic excursions into Transcaucasia and especially Georgia.
3. Bernard Furnon – A new discovery of Alatyr Zemstvo
Retired officer of the French navy. I live half time in Russia (Moscow) and in France (Avignon). My main collecting interests are Zemstvo philately and Imperial Russia. Expert AIEP for Zemstvo philately. Member of BSRP and various other societies related to Russian philately. Life member of the Union of philatelists of Russia.
4. Neil Richie – An opportunity for you to show some single items that you may not be able to show otherwise. It’s entitled “Items I know something about but maybe someone knows more”

New instructions
HOW TO JOIN THE MEETING

Russia 1912, postcard showing workmen on the Transbaikal Railway
The 4 kop. stamp is cancelled with a double oval Irkutsk Vokzal railway station postmark and is dated 8.10.12. The postcard is addressed to Theophile Piry, in Paris. He was the first Director General of the Imperial Chinese Post & Customs, circa 1900-1910, and later became Postmaster General of the Imperial Chinese Post Office. 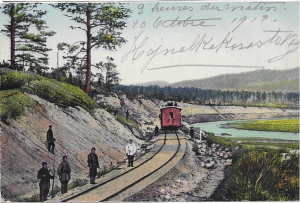 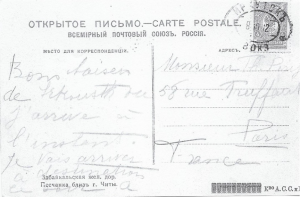 PROGRAM
1. Introduction by host, President of BSRP, Neil Ritchie
2 Ivo Steijn – Azerbaijan, the (re)birth of a new nation, 1992-1994
Ivo works as a director for a bank in California and lives in Los Angeles. His collecting interests include Crimean postmarks, Siberian postal history of the Civil War period, and various post-Soviet states like Azerbaijan, Ukraine and Turkmenistan. He has been a BSRP member since the late 19th century (only a slight exaggeration!) and has fond memories of the meetings at the Union Jack Club, back when he still lived in the Netherlands.
3. Joseph Taylor – Allied intervention in Russia 1918-1921
Joseph is retired and living in New Haven, USA. Joe joined the BSRP in 2018, contributing an article entitled ‘Allied Intervention in North Russia’ based on an original article in Rossica Journal No. 116, April 1991. which appeared in the 2020 Special Edition No. 110 of the British Journal of Russian Philately.
Joseph has been collecting stamps since April 1964. He started his collection of Allied Intervention in Russia in March of 1981; many of the items from his collection he purchased at two New York City annual stamp shows.
4. Neil Ritchie – An introduction to the WW1 censor marks of Finland
I’m a retired Architect living in Sheffield UK. My collecting interests include WW1 Russian and Finnish censorship marks, Allied Intervention into Russia, WW2 Pictorial Soviet Fieldpost stationery, Latvian Ruble period 1918-1922, Poland (mainly 1944-45 plus a few other periods). In addition, I have put together a collection of WW1 Canadian Military 1914-1919 from mobilization, the first contingent, the western front, Canadian military railways in France and finishing with their part in the Allied Intervention into Russia. I own an undeveloped collection of the Spanish Civil War and I am the editor of the Spanish Study Circle magazine “Espana”, in spite of knowing very little about Spanish Philately, but it’s a quick way to learn. I was introduced about ten years ago to the BSRP by Edward Kempla and managed to attend some of the pre-Covid London meetings .

PROGRAM
1. Introduction by host, President of BSRP, Neil Ritchie
2. Gilbert Rios – Use of paper-seals and free-frank mails in the Imperial Russian Post: positioning and scope
3. Maxime J. Citerne – Three journeys through Imperial Russia, and beyond
4. Neil Ritchie – An introduction to the WW1 censor marks of Finland

Dial in details sent to members in individual emails and also available on the Forum on this website.

Due for publication on 15 April 2021, all members of the BSRP will receive a PDF copy of the book. If you would like a hard copy, please get in touch as soon as possible via messenger or email to [email protected]